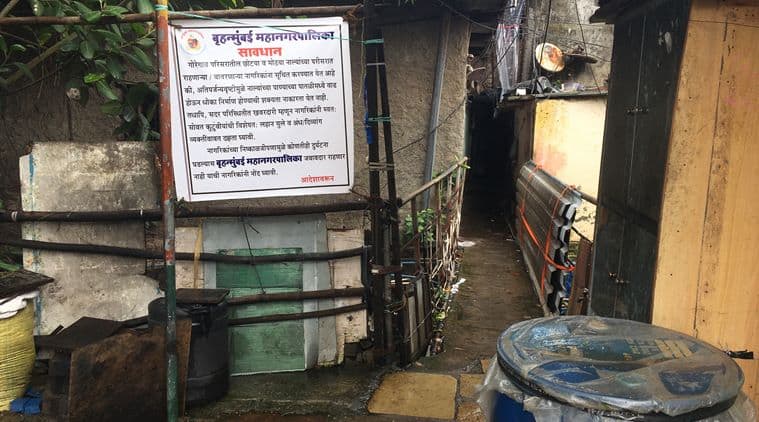 Last week, as Bharatbhai Chawl in Mumbai’s Goregaon East marked a year since the passing of one of its favourite children, the Brihanmumbai Municipal Corporation (BMC) served them an unexpected reminder.

Posters hung at both entrances to the chawl reminded local residents to keep a close watch on their children during the monsoon and warned that should an accident like the one that claimed one-and-a-half-year-old Divyansh Singh on July 10, 2019 occur again, the civic body would bear no responsibility.

Only a few threads of the poster hung above the drain, into which Divyansh disappeared, now remain after angry local residents tore it apart. 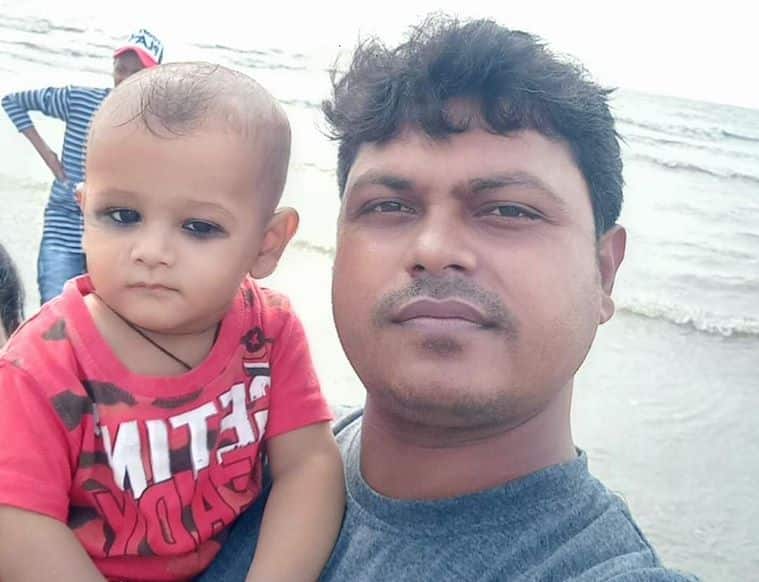 Divyansh with his father Surajbhan. Express

“The BMC makes it sound as though people fall into drains deliberately. BMC ko sharam nahi aayi aisa poster lagane mein?” asked Divyansh’s father Surajbhan Singh (34). To the grieving father, the posters are an unnecessary reminder of the tragic circumstances in which he lost Divyansh.

On that rainy night last year, Divyansh had scrambled out of his home and turned right towards the chawl’s entrance, where the Motilal Nehru Road was flooded with water. “He loved playing in water. At home, he would take off his clothes and sit in a tub of water. He enjoyed running around but always turned left to return to the chawl,” said Surajbhan, who works at Bharat Petroleum. He can only speculate that the sight of so much running water may have led his son to turn right that night.

Divyansh’s mother Sandhya meant to chase after him but stopped to wear her slippers. In those 12 seconds in which she lost sight of her son, he shot towards the rivulets of rainwater gushing into an open drain at the entrance, hesitated briefly and decided to head back.

By the time Sandhya reached the open drain, Divyansh had probably been swept into a major nullah that runs along the Goregaon-Mulund Link Road and stood no chance of surviving.

“At first, my wife thought someone in the area my have spotted Divyansh and picked him up because our neighbours were fond of him. But everyone she asked told her that they hadn’t seen Divyansh. I was at a petrol pump getting my car filled and was chatting with a friend when my wife called and told me that she couldn’t find Divyansh. I rushed back and after 15 minutes of searching, we decided to check the CCTV cameras,” he said.

Investigations into Divyansh’s death have revolved around the CCTV footage, with the Mumbai Police insisting that two men were seen lifting two concrete slabs covering the drain on July 1, 2019.

Surajbhan, who has not been given access to the footage, has a different version. “The drain was never covered with RCC (reinforced cement concrete) lids. Locals used to cover the hole with wooden planks, which would wash away every time it rained heavily. We had complained to the BMC about this on many occasions,” he claimed.

The BMC’s P South administrative ward office and the area’s Shiv Sena corporator, Swapnil Tembwalkar, had claimed not to have received any written complaints about the drain lying uncovered.

The family’s final hope lies with the Maharashtra State Human Rights Commission, which took suo motu cognisance of Divyansh’s disappearance and issued notices to the BMC and police last year.

In a report submitted to the commission last December, the Dindoshi police station said that it was not able to identify the two men it claimed removed the drain’s concrete covers. The police cited the camera’s wet outer plastic cover as the reason why the faces of the men could not be clearly seen. The police’s report also included statements of people living in and working in tiny industrial units in Bharatbhai Chawl, who admitted to regularly opening drain covers to allow rainwater to escape. Surajbhan is waiting on the commission to set its next date to hear about the progress in the probe.

A year later, the police’s suspects are yet to be found. What has changed though is that the drain is now covered with two heavy RCC lids. The Singh family has since shifted out of its ground floor room and into a 12th-floor apartment across the road.

“There are a lot of memories tied to the chawl and the only way we could escape them was by moving away,” said Surajbhan. His elder son Siddhant, now six, occasionally asks about his younger sibling. “We divert his attention with toys and video games. But it isn’t so easy,” he said. When Sandhya brought up Divyansh last Friday, Surajbhan said he changed the subject.

He hasn’t told her about the BMC”s posters either. “For the few months that we stayed in the chawl after the accident, we couldn’t not look at the drain whenever we left home,” he said.

Surajbhan is glad he wasn’t around when the posters were hung. Its wording also reminds him that the authorities blame him and his wife for letting Divyansh out of their sight. It reads – “Citizens living in and around the numerous major and minor nullas in Goregaon are hereby notified that due to extremely heavy rainfall, the water levels will rise and the possibility of danger arising cannot be eliminated. Hence, keeping in mind these conditions, citizens must look after themselves and their families, especially young children, the elderly, the disabled and blind. The BMC will not bear responsibility if an accident occurs because of negligence by citizens.”

The timing of the BMC’s notice, Surajbhan claimed, was deliberate. “It is a very cruel thing to do,” he said.

Despite repeated attempts, P South Assistant Municipal Commissioner Devidas Kshirsagar did not respond to phone calls and text messages seeking comment. Tembwalkar said that he was not aware of BMC’s notice.

📣 The Indian Express is now on Telegram. Click here to join our channel (@indianexpress) and stay updated with the latest headlines

For all the latest Mumbai News, download Indian Express App.