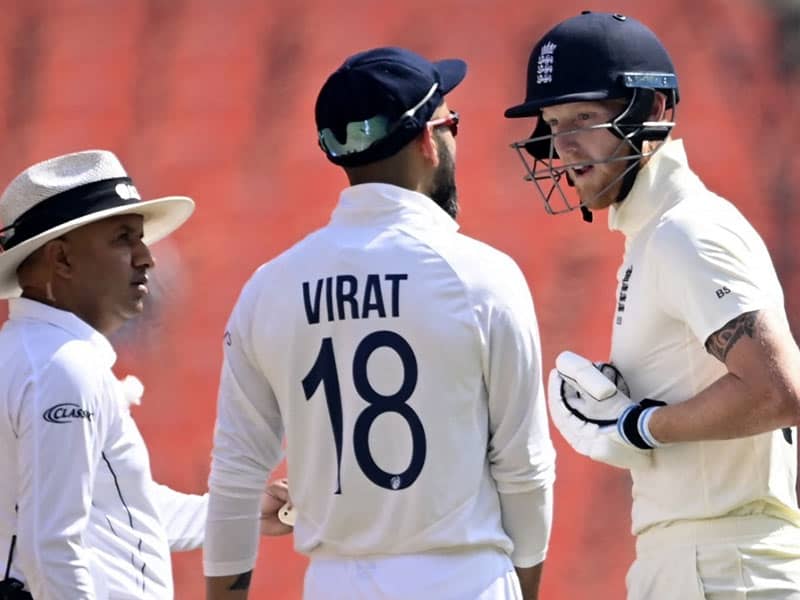 IND vs ENG: Virat Kohli and Ben Stokes produced a moment of drama in the 4th Test.© AFP


The ongoing Test series between India and England has seen its fair share of drama, and it continued in the fourth and final Test being played at the Narendra Modi Stadium in Ahmedabad. There was a heated discussion between Virat Kohli and Ben Stokes in the first session on Day 1 and the umpires had to intervene and separate the two. The incident happened after the England all-rounder had just come into bat, with Mohammed Siraj having dismissed Joe Root.

Siraj, on the final ball of the same over that he trapped Root leg-before, fired in a bouncer, following which Stokes said something to the seamer.

Kohli soon came in to have a word with the all-rounder and his batting partner Jonny Bairstow. While Kohli was seen having a little laugh at the start, the conversation carried on for a while and the umpire was seen trying to separate the two, even signalling an invisible wall between them.

The banter carried on, as later, Kohli was heard telling Pant to keep the chatter up while Stokes was batting.

England won the toss and opted to bat, but India soon had their first breakthrough as a rampant Axar Patel struck with his second delivery of the match to remove Dom Sibley.

Sibley’s opening partner Crawley tried to counter the spin menace by being aggressive, but miscued an aerial shot to mid-off.

Siraj, playing in place of Jasprit Bumrah, then got the big wicket of Joe Root to put England to the sword.

However, Stokes and Bairstow put up a good partnership to take England to Lunch at 74-3.